Having been away for two weeks, it’s like coming back to a whole new room!  While I was away three cats came and went (Beni the grey, Gabby the tabby, and Felix Panther), while Oscar & Dolly got adopted, as did Princess Matilda (hooray!) and Mr. Bellamy (finally had his turn!) and RAGGEDY ANNE. I’m especially happy about these last three — senior cat Matilda seemed to be getting weary of waiting, Bellamy had been passed over so many times, and I’d been worried about how R.Anne was doing since her near-adoption fell through. 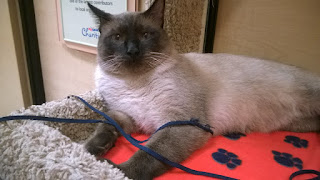 The only cats still with us that I’d met before were our bonded pair, BABY KITTY and ELEANOR, who have gained a lot of confidence: they came out and made themselves at home in the outer room (one on the cat-stand, the other on the bench). Neither wanted a walk; they just wanted to hang out and enjoy being out of their cages.
Finally got to meet GHOSTLY, who I’d read about a lot. With three adoptions pending I got to see him just in time before he headed out to one of those new homes (which happened that same evening). He’s a great cat: friendly, playful, gentle;  gets along well with the other cats when they’ll let him, and is full of curiousity and a willingness to try something new (whether a walk or exploring out-of-the-way places in the room). He had his first walk — he got the idea at once but we differed about strategy: he thought that the obvious thing to do was to find a safe place behind or under somthing from which to peer out and take stock, and didn’t see why I kept preventing him from doing so. Once back in the room he went exploring, stealing a bite of nom from all the food dishes on the lower level. 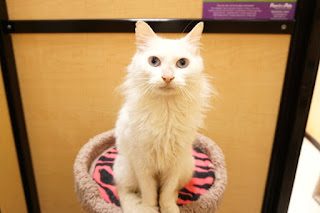 Of the three new cats, KARMA (a big grey torbie) was talkative and affectionate until I pulled her out of the cage and put her atop the taller cat-stand, whereupon she became a hiss machine. Eleanor jumped up on the level beneath her and got hissed at repeatedly but after a bit decided to just ignore it and settled herself down. Later in my shift Karma calmed down enough that I got the leash on her and took her out for a carry-around walk. She was pretty vocal (except when listening to the birds) and was glad when it was time to get back in the nice safe room. Once she was back in her cage again at the end of my shift, she went back to talking and purring when petted (rather than hissing and swatting). Clearly she really likes people and just as clearly the proximity of other cats winds her up. Once she settles into the room I suspect she’ll declare herself Boss Cat.
JULIETTE (white w. grey) was the shyest of the three newcomers (who I think had all arrived earlier that same morning): she liked being petted inside her cage but from time to time would get spooked and retreat into the other side (w. the litter box). Games within her cage she thought a good thing but again got spooked easily. When lifted out she got back in her own cage as soon as she could. Sweet little cat in need a lot of one-on-one time.
Finally, VACA (white w. black) seemed shy but when lifted out slept quite happily on the blankets in the back corner of the room (atop the litter-containers). She loves being petted and getting attention but for now at least kept her distance from the other cats.
No health concerns that I noted.
It’s good to be back.
—John R.
Posted by John D. Rateliff at 5:11 PM