So, a few weeks ago I learned from Jim Lowder (thanks Jim) that a major Dunsany collection was being auctioned off. Too rich for my blood, as they say, but my attention was fixed by one side-item: an original piece of artwork by the great Sidney (S. H.) Simes. I consulted the budget and, having been saving up for something else, I decided I cd just manage a bid if it came in at the bottom of their estimated price. It did. So I've been anxiously awaiting its arrival day-by-day ever since. And today it came.

It's not one of his Dunsany pieces, the art that made him famous  (and for good reason: those Dunsany himself bought, and they're hanging in Dunsany castle*).  But it's a stiking image nonethless: a dark, moodly little sketch of a waterfall, only about as big as a Kindle, done not on canvas but panel (i.e., a piece of wood). I'll have  to arrange to have it properly framed, and possibly cleaned/conserved as well. I already know just where I want to hang it.

It's not often that you get the chance to find an original piece by one of your favorite artists: today is a good day.

Now if only someone would start selling replicas of Clark Ashton Smith's little sculptures . . .

P. S. : Here's what the piece looks like. Evocative, isn't it? It looks like a place that shd have a story behind it, except there's no story (unlike his famous work with Dunsany on THE BOOK OF WONDER, where Sime drew the drawings and then Dunsany wrote stories inspired by them). 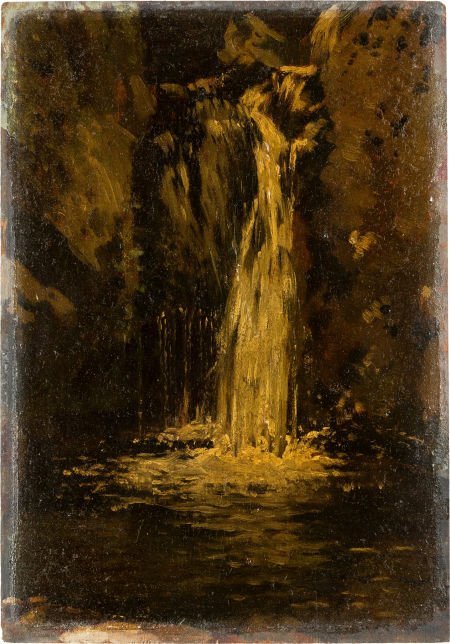 Great piece, John. How are you thinking about framing it?