So, today's post wd have been about Tolkien's JONAH, which finally arrived. But that was before I came home at 2.30 and discovered the break-in; the rest of the day's been spent blocking up the burglar's entry route, making a list of what's missing, and changing a whole lot of passwords.

Have to say, burglars are a lot more fun to read about, in stories by Tolkien and Dunsany, than to experience first-hand.

So, instead here's a picture of turtles.*  Look closely: those are not logs the turtles are sunning themselves on. 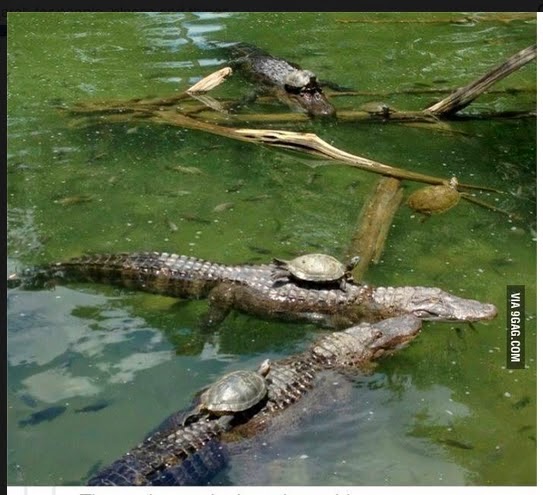 I know my own mental image of turtles changed a lot after I saw a clip on the BBC of turtles in an African watering hole chasing down waterfowl that landed there. Clearly the turtles in this picture either think themselves lords of their domain or are certain a life-and-let-live pact exists with their fellow reptiles. Let's hope they're right about that.

*thanks to Janice for the picture
Posted by John D. Rateliff at 9:46 PM

Well that sure does stink. I hope you catch the dirty crooks.

Sorry to hear about the burglary. But the turtles are cool.