Me, on Dvd (THE DESOLATION OF SMAUG extras)

So, yesterday the extended edition of THE HOBBIT movie two, THE DESOLATION OF SMAUG, came out. I had some trouble finding a copy, having to make two stops and eventually to settle for BlueRay rather than the DVD I'd have preferred. I was not only eager to watch the extended edition itself, particularly the new and expanded (and, in at least one case, re-edited) scenes, but I was curious to see the extras.

You see, I'd been flown down to L.A. (my first time ever visiting that vast city) this summer, where I'd been interviewed about THE HOBBIT by the folks making a documentary to go on the dvd as one of the extras. I was much impressed with their professionalism, and the degree to which they'd done their homework, and in general found it an interesting and enjoyable experience.

Still, that didn't mean any of the resulting footage wd necessarily be included in the final piece. They have a lot of Tolkien scholars to choose from, and any bits from me might well end up on the cutting room floor.

Turns out, though, that quite a lot of it made the final cut. Here's a shot Janice took last night of it playing on our tv. 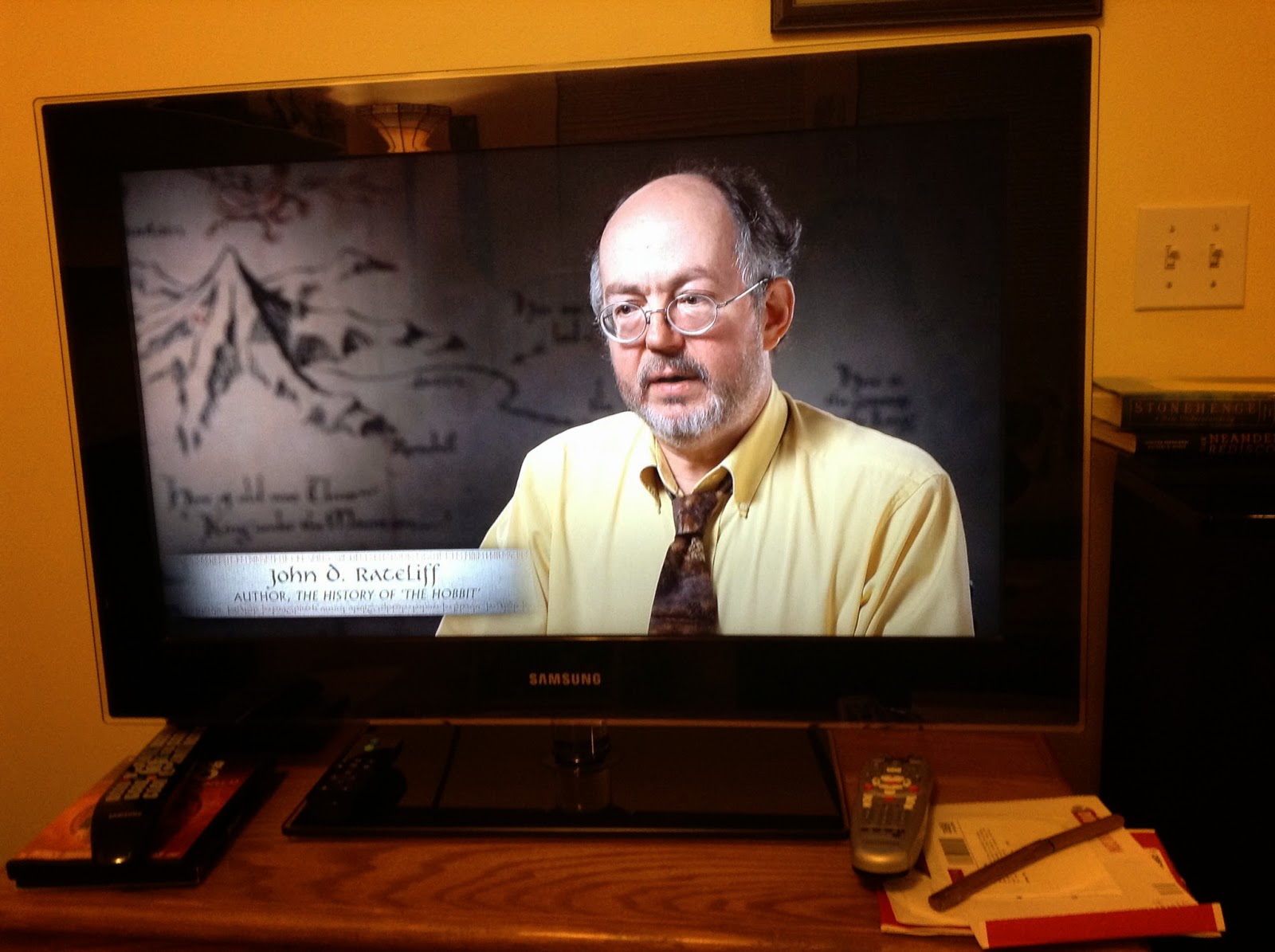 My contribution is mostly in the dragon piece; I'm impressed how they've woven together lines by Shippey, myself, and John Howe to form a coherent narrative. So far I've only caught one gaff, where I say 'the saga of Bothvar Bjarki' where I shd have said 'the story of Bothvar Bjarki, part of the saga of Hrolf Kraki'. As gaffs go, I can live with it; much less embarrassing than Langland/Gower.

More later, when I've had a chance to watch the whole extended edition all the way through, as well as all the documentaries and extras.

Great to hear that they made use of your knowledge, John! I look forward to seeing it, once I can track down a copy of the DVD (no BluRay for me).

I'm also curious to hear your thoughts on the extended scenes, and the film itself in its extended form (which I have seen). I think the additions make a big difference this time around.

Hi Doug. Thanks for the kind words.

As for the extended scenes, yes I'll be posting on them once I've had time to mull over their impact. Their treatment of this film's extended edition is quite different from any of the previous Jackson Tolkiens, in that they actually change scenes, rather than just adding to them.

First, though, I want to work my way through all the extras, of which there is a plentitude.

I finally got a chance to watch through the extras, and I was really, really impressed, both by your contributions, and overall. It was interesting to see one of the VFX artists talking intelligently about Ungoliant in the section on the spiders.