Game Designers 'Round A Table

So, Monday night I got together with a bunch of fellow game designers/editors for our monthly meeting. Usually there are about four to six of us, but this time we had an unusually large turn-out: twelve people. Which is great for seeing people I haven't seen in a while but also means  things tend to break up into separate conversations -- in this case, one going on to my left, another to my right, and a third across the table from me. Luckily we had an interesting mix of people, some I've known for years along with some I don't know as well and one or two I think I was meeting for the first time. What struck me most was the thought of how much gaming industry history was sitting around that table, from Jannell Jaquays (whose work goes all the way back to Judges Guild) and Steve Winter (key member of the ADandD 2nd edition team) to Jeff Grubb (developer of the original FORGOTTEN REALMS boxed set), including two of the designers for the still unreleased DandD Fifth Edition, Bruce Cordell and Rob Schwalb.

We were fortunate enough that Bruce took a photo that came out really well: 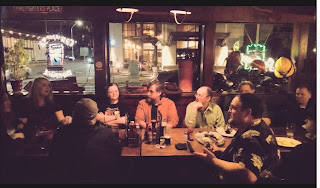 I'm the one in the green shirt, just to the right of the center of the picture; for other identifications, see Jeff Grubb's write up on his GRUBSTREET blog:

Nice to have a striking momento of a pleasant evening.