So, having watched the extended version of THE HOBBIT: AN UNEXPECTED PARTY, I've been working my way through the extras and enjoying the documentaries that make up the third, fourth, and fifth disks in this five-disk set (the first two holding the expanded edition of the movie itself). Last night I started in on Appendices Part Eight: Return to Middle-earth, the fifth and final disk. And, much to my surprise, I saw my book, THE HISTORY OF THE HOBBIT, briefly appear onscreen.

The context is Richard Armitage, the actor who plays Thorin, discussing how he likes to know a lot about his character, even ideas Tolkien had that he changed his mind on, since the change reveals what Tolkien wanted to convey coming into focus. And what should appear on the screen but a set of five books: 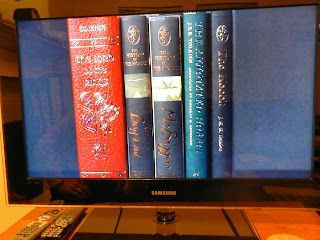 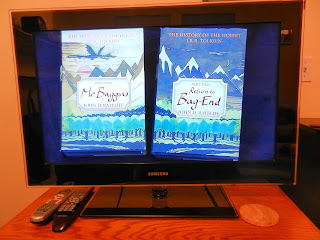 In case the image isn't clear enough, the five books shown in the first image are, from left to right,  THE LORD OF THE RINGS (the one-volume Redbook edition), my RETURN TO BAG-END, my MR. BAGGINS, Doug Anderson's ANNOTATED HOBBIT, and THE HOBBIT itself (a deluxe edition wh. I don't actually have a copy of).   Then, if this weren't enough, a second shot of just my book appears just a few seconds later, which appears in the second image above.

We weren't able to do a screen capture on my laptop (I assume there's encryption on the disk to prevent this), so Janice took a picture of it as it appeared on our tv and then transferred the results to my computer. Have to say I'm pleased at this evidence they did their due diligence in researching THE HOBBIT when making the film, and of course I'm tickled that they chose to show my book onscreen -- always nice to see something that may result in my being able to share my enthusiasm for Tolkien with new readers.

--John R., w. many thanks to Janice for the photos.

P.S.: To find this section among the documentaries, go to disk five (THE APPENDICES PART 8: RETURN TO MIDDLE-EARTH). Click on the button for "The Company of Thorin". Then on the next screen, click on item #2: "Thorin, Fili, and Kili". The first image appears at about the 1 minute twenty-four second mark, the second at the 1 minute forty second mark.

I'll just be starting the first disk of the appendices today, but when I get to the shots of your books and Doug's I promise to "woohoo!"

I love it when the actors care about knowing something about Tolkien's works.