Colin McComb of the Clan McComb

So, I've finally started to tackle the huge job of sorting through all the old boxes of TSR stuff -- not games but all sorts of paper: memos, meeting notes, schedules, galleys, and the like. One of the first things I found were color print-outs of prototype covers for the RAVENLOFT line, which help me more or less date this box to 1995/96, the five products being SERVANTS OF DARKNESS, CHAMPIONS OF THE MIST, the DOMAINS OF DREAD hardcover, THE SHADOW RIFT (which I wound up contributing to), and THE FORGOTTEN TERROR. Also here was a newspaper clipping of Gary Gygax helping to judge a cooking contest, a bunch of old business cards, a departmental survey (more on this in a separate post), two memos from our department's boss chiding the designers and editors for not meeting deadlines, and a sign-up sheet for Colin McComb's going away party. I took this last item and showed it to several fellow ex-TSR/ex-WotC folks, who thought it probably dates from August 1996 (though August 1995 is also a possibility).  Since it records a moment in time like a sort of time capsule, I thought I'd post an image and a transcription here, for those who might be curious about the group of people who produced so much good material back in what is now nearly twenty years ago.

First, here's a picture of me holding up the page in question. This was taken Wednesday night by JD Wiker at Steve Brown's birthday dinner -- just to show that we're still doing the same kind of thing all these years later (three of us on that sheet were actually at this week's dinner). 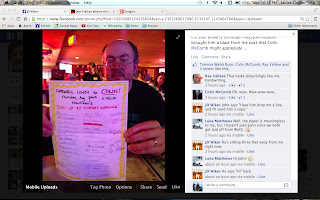 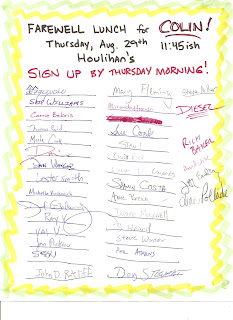 Finally, here's my transcription of the name, since not all of them come through on the image. I've added some descriptors, but these may not be entirely accurate, since people moved around between jobs (such as Bill Connors and Steve Miller, hired as editors but then moved over to design, or Skip Williams, long a stalwart of the RPGA later moved over to RandD as a designer) and I don't know for certain the exact date of this event (probably 1996, but possibly 1995).

Colin himself, of course, was a designer, and a very good one: one of those overlooked figures like Rich Baker or Bruce Nesmith (or, as editors, Andria Martin and Miranda Horner) who never got nearly enough recognition for just how good they were.

So, best wishes to Colin here and now, with good memories of there and then.

P.S.: By the way, this isn't by any means a complete list of everyone who was in the department at the time -- I can think of a dozen or so more designers and editors whose names aren't on the sign-up sheet -- probably because they had some other commitment that day: Slade and Bill S. and Michele C and Bill O. and Dale and Julia and Bruce C. and Keith and Andria and Karen and Harold and Ed and Roger. And I'm probably still forgetting a name or two even then. It was a big department. --JDR

Thanks, John. It means a lot to me to get that kind of praise from a scholar like you.