The Return of The Cat Room

So, after having been closed for the holidays and Covid crisis, the cat room is now open again for adoptions. I missed last week because of health issues but made it in today (Friday the 22nd).

Of the five cats they reopened the room with, three had already been adopted and one gone back up to Arlington for health issues. That just left Mr. Loki, who had the room all to himself and loved it. He was out the whole two hours I was there, the first hour walking out in the store and the second playing and getting petted in the cat room.

Having spent that much time with him one-on-one, I think that instead of ‘Loki’ (god of mischief) his name shd be Mr. Low-Key because he’s so mellow. And while he may not like other cats, he loves people. Over and over during the walk he’d go up to a customer or employee, stopping a little way off. If they spoke to him or held a hand out he’d go over and ask to be petted; otherwise he’d go off in another direction. In short he’s quite the charmer and attracted a lot of attention. Towards the end of the walk, and again later back in the cat room, he went belly-up and asked for belly rubs. For a while I held him belly-up in my lap on the bench. Luckily he’s the kind of cat who tells you when he’s had enough.
For the rest of the time he got groomed and petted and played with. I can also confirm that he loves catnip, to the extent that he just inhales the stuff. Also that the new arrangement of stuff in the store around the cat room a great improvement, like that row of cat-trees between the cat room and the aquariums.
Here’s a picture of him just after he’s come out to start his walk and another of him belly-up in my lap. Parker used to do that and wd even fall asleep in that position when I was in the rocker but it's rare.
A great cat who I hope will soon find a home that appreciates him.
—JDR 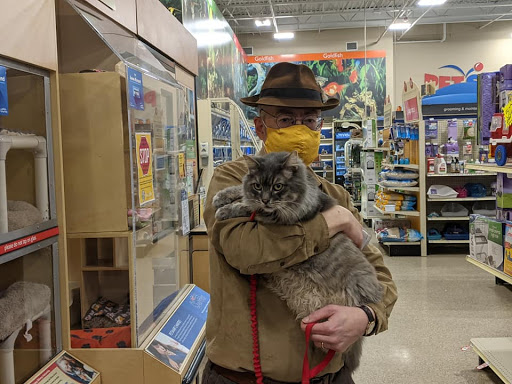 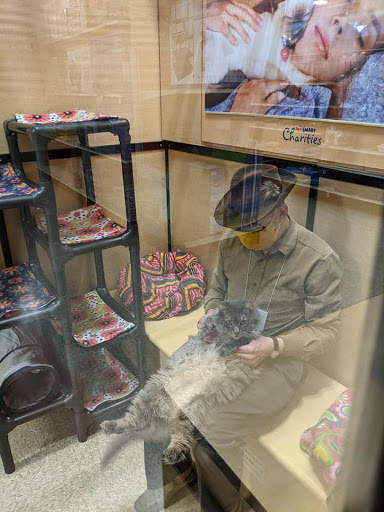 To which I am able to add some good news: Mr. Loki got adopted today and will be living out on Mercer Island as an only cat, just the way he likes it.