So, now that we've just gotten back from what will probably be our last trip of the year, it's time to attend to some arrears, such as posting more on the blog. In particular, there are various odds and ends I wanted to post on but never got them properly written up at the time.

Accordingly, here are some pictures (by Janice) I wanted to share from our visit with our friends Bijee and Ray in mid-November down to the Trout Lake region (just north of the Columbia River Gorge and just south of Mt. Adams, one of the chains of not-currently active volcanoes that stretch across the state*). During one of our walks, Bijee showed us what is, according to our best guess, a fumerole or volcanic vent, connected somehow to the Mt. Adams system.**  It's currently no longer active, and there's no telling how long it's been there: Bijee only discovered it a year ago, and said it's crumbled a good deal since then. I suspect in another year or so it'll probably be gone.

The first two photos below shows the mini-volcano in all its glory, while the third has me in the picture for perspective (as you can see, the main part of the fumerole is about twice my height). The last picture shows several rocks from the debris at the base of the mound. which tended to yellow, red, and a brownish orange. Some of the rocks were very crumbly, almost sandstone-ish, while others were rock-solid. One of the smaller, more crumbly rock had a few blackened pine needles in it. And a few had quartz-like crystals.

All in all, an interesting spot I'm glad to have had a chance to visit; thanks to Bijee for sharing. 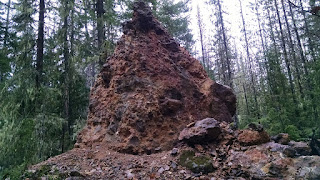 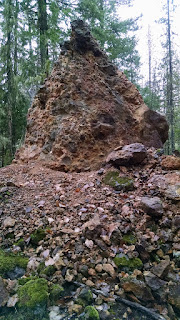 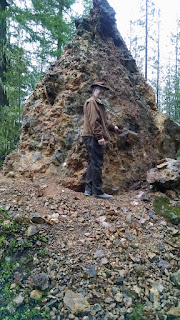 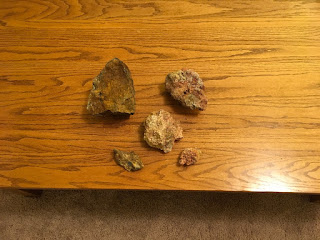 Looks like a fun discovery! Did you find any pumice in the area too?

I don't remember seeing any pumice at the site, but there's plenty of it all around the Mt. Adams area -- the White Salmon River, which runs right behind the place we were staying, has quite a few pumice boulders both in the river-bed and in the walls of its small canyon.