So, thanks to friend Jeff (thanks Jeff), here's another data point to add to those already gathered about the Gygaxian gnome; eventually we shd be able to connect the dots together and get a likely scenario re. the D&D gnome's origin.


I had remembered that Gygax published a few chapters of a god-awful D&D novel in the early days of THE DRAGON (later DRAGON MAGAZINE), under the pseudonym Garrison Ernst, which I'd read part of back in the early/mid-90s.* What I'd forgotten was that the name of this aborted novel was THE GNOME CACHE. I don't have a full run of DRAGON, unfortunately,** but luckily I do have the invaluable DRAGON MAGAZINE ARCHIVE reproducing the first 250 issues in facsimile.

Checking it now and reading the whole story, such as it is (seven chapters in sixteen pages spread over seven issues***), I can see it's of historical interest as probably the first piece of fiction set on Oerth (albeit a v. undeveloped version thereof) if of no interest as a work of art.

What is odd, though, is that for a work named "The Gnome Cache" it has no gnomes and no cache. Instead it tells the story of a jerk who robs his father and uses his stolen funds to set off on a life of adventuring.  Picking up a sidekick along the way he has encounters with a group of brigands (whom he briefly joins), works as a caravan guard, barely escapes from an ambush, loses his temper a lot, and wanders around in the woods.

It's not until the last two sentences of the last paragraph of the last chapter that we get a hint of anything possibly relating to the title:


"Great Gods!" expostulated the startled errant.
"It is a dwarf being pursued by a pack of giant toads
and weirdly hopping men!"****

This scene is actually illustrated***** 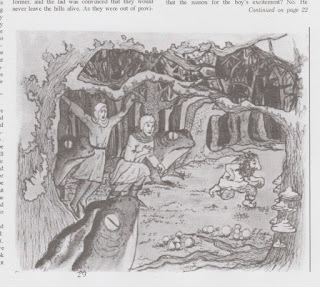 What we're shown here is clearly a dwarf, supporting the idea sent in by Zenopus Archives in a Comment on an earlier post that 'gnomes' were just a kind of dwarf in Gygax's original conception, rather like hill dwarves vs. mountain dwarves:


Unfortunately for our inquiry, but a stroke of luck for early DRAGON readers, this is the last installment published. The editorial for the next issue mentions (#8 page 3) that, just as had been the case in issue #4, a featured piece had crowded out THE GNOME CACHE for this issue. Editor Tim Kask adds that


It is expected, however, that that fine tale will resume in #9.

This turned out not to be the case, and so far as I known no more of THE GNOME CACHE was ever published (or, I suspect, ever written).

*this was back when Roger Moore was the current editor of DRAGON; he let me borrow early issues from the magazine department's reference set, from which I photocopied a lot of interesting pieces. This wasn't among them.

**I'm missing seven of the first ten issues, and a few issues near the end of the journal's long run.

***This is somewhat less than it appears, since some of these are half-pages sharing the spread with ads and the like, as is the wont of magazine fiction.

****THE DRAGON issue #7, page 22. It's probably too much to ask that these wd have turned out to be hopping vampires. I suspect they might be werefrogs, or frog/human hybrids, given that this encounter takes place near Castle Blackmoor, known for its terrible giant frogs.

*****on page 29. If this reference looks a bit off, it's because the story appears on pages 28, 29, and 22 of that issue, so that the conclusion of the chapter comes several pages before the main part of the chapter itself. Such were the complications of lay-out in the early days of TSR periodicals printing


According to Rob Kuntz it was a complete novel of 20 plus chapters.

Indeed, Rob has recounted Gary reading the pages of Gnome Cache to him while they were coming fresh off the typewriter. I didn't recall Rob mentioning the number of chapters, but do remember him saying that he read the the conclusion of the tale.

Years ago I read somewhere on-line that the hopping humans and toads were an earlier version of the deity Wastri and/or his followers. Wastri was written up in Dragon #71 (March 1983) and then appeared in the World of Greyhawk boxed set. Looking at the Dragon article now, the description of Wastri says "While humanoids can serve, demi-humans are fit only to be slain — especially dwarves, gnomes, and halflings. These, with the aid of his gray-clad “Servants,” he hunts with his toad packs and exterminates whenever possible". This is pretty much what we see in this illustration. Later in the article, it states that "It is rumored that some of the monsters they breed appear remarkably human, just as some of Wastri’s followers appear toad-like", which could explain the hopping.

hi Paul S.
Sounds like Kuntz wd be the one to ask, then -- though I don't know if he'd remember details after so many years. Anyone in touch with him?
--John R.

hi Allan
This is one of those times when I'm glad to be proved wrong. A complete novel set in an early conception of Oerth wd be of interest to a lot of Greyhawk fans, whatever its shortcomings as apprentice-work. I wonder if any of the unpublished material survives.
--John R.

hi Zenopus
Yes, that sounds v. likely. I vaguely remember the DRAGON MAGAZINE entry on Wastri the Hopping Prophet from when that issue originally came out but I'd slipped my memory till yr reminder. And here I'd been thinking they were an interesting precursor to Zeb Cook's yuan-ti, which came along a few years later.
--John R.

I thought it had a lot of his early ideas, especially Wastri and the toads... that always seemed to come clearly from his on conception, i can't imagine a work he would have borrowed them from.

The story is awful, but interesting in how he seems to view Greyhawk life originally.

I agree that being able to mine the complete Gnome Cache story would be worthwhile. Paul: does the rest of the manuscript still survive in Gail's materials?

It doesn't quite address the gnome issue, but this article points to an often overlooked but IMO major influence on early D&D: