So, all those years of feeding crows has finally paid off. 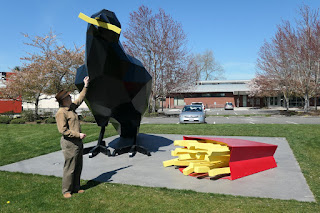 Thanks to Janice for the photo. We headed down to Enumclaw today to help support a great little local shop, The Pie Goddess, only to unfortunately find it closed. So we walked around the mostly empty streets of Enumclaw, something we've been meaning to do for quite a while now and just never gotten around to. In addition to a variety of local shops (all currently closed, of course) we saw some interesting green spaces and public sculpture, including a Purple Heart park,* a bronze pony, and two huge bronze bulls pulling a log.  Worthy additions to the appealing public sculpture like the Kirkland Crows, the Renton Reader, and the Kent gumballs.**

A monument in the park was a memorial to a planeful of Marines who went down on Mt. Rainer not long after the end of World War II and whose bodies were apparently never recovered: I was surprised to see that one of them was from Texarkana, the town I was born in, though the private was from Texarkana Texas, whereas I'm from Texarkana Arkansas (across the street).

All the time we kept being reminded of how much noticeably larger The Mountain is from Enumclaw, which is not that far a drive from Kent (maybe thirty miles).


On the drive out while passing through Auburn we'd sadly noticed that Proper British Bacon, the shop where I got all my English cheeses, has indeed shut down -- for good, not just the duration of the present crisis. But we also spotted the giant statue of a crow, which we made a point of pulling over on the way back to get a closer look at it. I really liked it. The sculptor's name is Peter Reiquam, and I liked how he not only made an eye-catching and appealing image but clearly knows his stuff. Not only are crows fond of french fries (their favorite scavenged fast food) but they've been proven to have brand loyalty. Given a choice, they go after McDonald's over other brands of fast food french fries --and while the logo is discreetly missing the coloring makes it clear it is indeed McDonald's.

*Which made me wonder: did Uncle Trig have a purple heart? He was wounded in the Battle of the Bulge, a disfiguring but not life-threatening injury.

**the kind that fall from trees, not the confectionary.