So, I did get to the Seattle Antiquarian Book Fair this year, along with Janice and Stan, and spent about four hours looking through many, many interesting books. In the end I came away with three books: one by Clark Ashton Smith, one by H. P. Lovecraft, and one by J. R. R. Tolkien.

The Smith was THE DOUBLE SHADOW AND OTHER FANTASIES (1933). This was actually CAS's first book,* published by Smith himself. It's essentially an oversized (8 1/2 by 11) pamphlet collection of six stories, printed by the local newspaper and sold by Smith by mail-order. I've seen this before but never been able to buy it, given that it's usually been priced at about three times what I paid today. The difference is that most copies are signed and this one isn't. So while it'd be nice to have a signed copy, it's better to have this unsigned copy that I can afford than no copy at all. 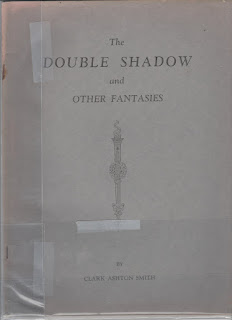 The Lovecraft was THE FUNGI FROM YUGGOTH, a pamphlet edition from Necronomicon Press. Not as nice as the old Randy Everts edition, but it'll be good to have this copy as a back-up in case the other gets too fragile at some point. I don't think much of Lovecraft's poetry aside from the famous couplet from the Necronomicon, but I make an exception for this sonnet sequence, which makes for a good read-aloud. 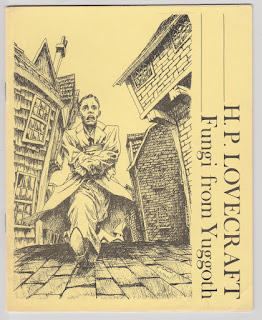 The Tolkien was a copy of THE SILMARILLION. I've had a copy of this since it first came out, of course  (I ordered it from Land of Legend in September 1977, just as I was beginning my first semester at Fayetteville). But forty-plus years on my copy is starting to show some serious signs of wear and I'm worried it may come apart. Now it can go into honorable retirement.

Mine was the American first printing first edition while the newcomer is the British first edition, with a much nicer cover (see below). I never have figured out why the US edition had as its cover art a colorized piece taken from THE HOBBIT rather than some of Tolkien's SILMARILLION art like the British edition. 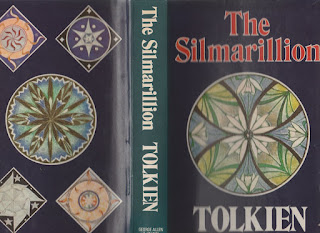 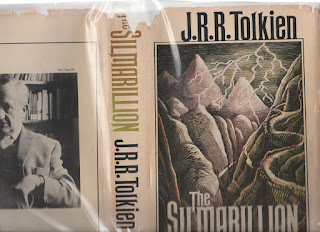 The best thing about the Book Fair is that you can find interesting books at reasonable prices if you were looking for good reading copies, as well as rare and famous books priced accordingly. For example, they had a copy of a first edition of Poe's THE RAVEN for $15,700. It's rather surprising that there was a three volume first edition LotR in really good original dust jackets for more than double that: $37,500. And these were not signed or inscribed or associational copies: just attractive copies of a much-in-demand book. When the bookseller granted permission for us to take a picture of them, she cheerfully pointed out they were displayed at the most prominent attention-getting spot in the booth for a reason. 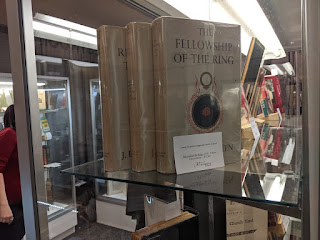 Both Janice and Stan said the most expensive item they'd seen was priced at $100,000, but neither cd remember afterwards what book it was. Later that night Janice remembered: a deluxe three-volume biography of Prince Albert (he of the Albert Memorial),** which Queen Victoria presented to John Brown. That she wd give a book glorifying the first love of her life to the second love of her life is odd, but then so is the whole Victoria/Brown story.

I was glad to see Tolkien well represented: two more sets of LotR, an American first of FARMER GILES, a TREE & LEAF, a third-edition HOBBIT with facsimile dustjacket, and two different dealers both offering up the first volume of THE BOOK OF LOST TALES, seeming not to realize this was half of a two-book set. No letters, but I wdn't have been able to afford them anyway. Still, it's always interesting to see what he has to say in each uncollected letter you come across.

And then there were the ones that got away: a nice hardcover of Jack Vance's DYING EARTH (a too much for just a reading copy, and I'm not likely to be doing any work on Vance in the foreseeable future), a first edition of VOYAGE TO ARCTURUS (surprisingly ordinary in appearance, considering what how iconoclastic it is inside), the Arkham House huge omnibus of all four of Hope Hodgson's novels (available from three dealers at widely ranging prices, all of them outside my budget).***

I'm not a collector of CSL but wd like to get more of his literary criticism.**** Last time I'd been on Whidbey Island I'd seen a copy of ENGLISH LITERATURE IN THE SIXTEENTH CENTURY EXCLUDING DRAMA but been put off by the price; the same copy was here at the show but still expensive ($400), as was another volume from the same dealer: SELECTED LITERARY ESSAYS ($300). I saw a smattering of other Lewis (a set of Narnia) but no Charles Williams at all.

I'd gone in thinking how nice it'd be if there were a booth in there offering rare and unusual rpg items, but as suspected it turns out I'd have to go to other venues than this.


--John R
current reading: GAUDY NIGHT by Dorothy L. Sayers (re-reading, third time through)
*and thus I think the first book by any of the three major WEIRD TALES writers.
**one of the most overhonored men in history.
***the same was true of the two Arkham House Clark Ashton Smith collections I don't have.
****I find these days the less seriously I take Lewis the more I enjoy him.