So, I didn't post a write-up two weeks ago because I never got my notes written up. And the following week I didn't go in to the cat room because the room was empty: all the cats had been adopted, leaving the room empty. This week the room was filled again on Wednesday the 4th, yet half those cats had already been adopted by the time I arrived yesterday at noon.

Here's a picture of ELLIE ruling the roost in her new home:

Thanks to the quick adoptions of the FINN and POPPY pair (who if I got it right arrived Wednesday midday and were adopted out Friday morning) and of Mr. BEAN (likewise; sounds like a great cat), we were back at three cats by noon today: MAESTRO MISTROFFELEES and bonded pair WINNIE (the little mom, who’s all black) and WIZARD (the kitten, who’s mostly black).
I started by making Mr. Mistroffelees, our twelve year old tuxedo cat, come out. He was so distressed he wet himself while I was pulling him from his cage. Once out, however, he was delighted to have attention, sitting next to me on the bench while purring up a storm. He likes being petted, being held, and catnip, I think in that order. I took him out for a walk, which he liked well enough but seemed to puzzle him. He quickly discovered the row of cat-stands but didn’t understand why he cdn’t climb up and over and behind them. He then discovered the cat-beds and declared all was forgiven, only to give up on me when I wdn’t let him curl up in them either. Still he did fairly well on the leash and I’m glad I got him out for a while.
I petted Wizard and Winnie* a bit in their cage (they were inside the bag and under the blanket, sometimes both in the bag, with little Wizard sometimes up on a self). I left their door open, thinking they might come out on their own. They didn’t, so I eventually made them come out by simply picking out the sack, cat inside. I put the soft tube on a shelf of the cat-stand and little Wizard claimed that spot. I put Winnie-in-a-bag on my lap, then transitioned this into her on my lap with a cat-blanket over her while I petted her some and rubbed her ears some. She was in petrified mode but hope the contact did some good. Eventually she got down and spent the rest of my shift atop the bins, partly covered by her blanket.
So, shy cats to those they do not know or trust, but they show every sign that they’re likely to warm up as they get acquainted with their new surroundings.
There were lots of people looking at the cats from outside. Hope they spread the word.
—John R. 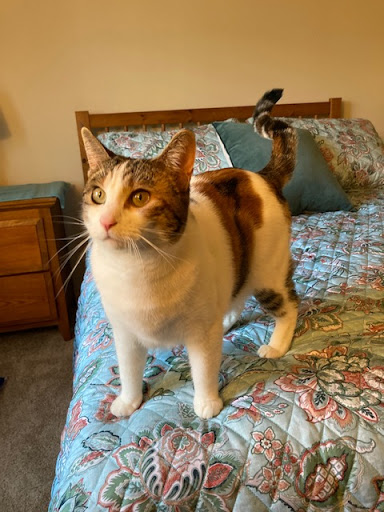