Jared in his element ('It seems to me')

So, here's a picture of Jared from the 1987 Marquette Tolkien Conference/MythCon in Milwaukee. Jared is on the right, talking with Christopher Tolkien (center) and I believe Charles Huttar (left); I can't identify the figure in the background. 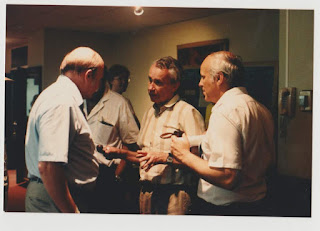 I looked through our photo albums hoping to find one of Jared as I remember him in my mind's eye: sitting behind a table, delivering a talk or a paper, in which his favorite phrase "It seems to me . . ." wd make its frequent appearance, but this is a thoroughly acceptable substitute.

I'm not certain but I think we met through my having just published my piece "She and Tolkien". As I remember it Jared wrote in to the journal (MYTHLORE) protesting that he'd discussed those same ideas in an not-yet-published book I'd not seen, and earlier made a presentation along those lines at a con I hadn't attended. I hunted down a copy of his book once it was out and, finding out he'd be in Madison, took the bus over.  I'd already made at least one run over to Madison to meet Richard West and attend a meeting of the Univ. of Wisc. Tolkien Society, taking the bus over in the afternoon and the last bus back at night, and I can't now remember whether Jared was at the Tolk. Soc. meeting or whether he was in town for WisCon a short time later.

In any case, it soon became a regular event for me to go over to WisCon each year to see Richard and Jared and others (such as Matt Fisher, Jan Bogstad, Phil Kaveny). Within a few years we had been joined by Verlyn (circa 1984) and Taum (about the same time or a little later) and others, like Doug Anderson and Paul Thomas and John Aussem.

Then came the 1983 MARQUETTE TOLKIEN CONFERENCE, organized by Chuck Elston, the Marquette Archivist; Terry Margharita, the Archives' Secretary; and Taum Santoski. I was not asked to present a paper but I did what I cd to help out, including writing virtually everyone who'd published a book on Tolkien to date and letting them know about the conference in case they wanted to attend; several did. Jared was one of the keynote speakers, along with Clyde Kilby, who had actually known Tolkien, and Dr. Joseph McClatchy who taught a course on the Inklings at Wheaton College.*

I think between them the 1983 Marquette conference and the 1987 MARQUETTE TOLKIEN CONFERENCE (aka The Marquette Mythcon) were the high point of Jared's career as a Tolkien scholar. He was the chairman of the Papers and Panels committee** and had grand plans for publishing a three-volume set of the proceedings through Garland Publishing, where he was now working as an editor: two volumes of Tolkien papers and a third on papers presented at the conference focusing on other authors, like Mervyn Peake, Kenneth Grahame, and John Ruskin. But while the conference was a smashing success (esp. due to the presence of Christopher Tolkien as Guest of Honor***) the proceedings failed to appear, the job at Garland went away, and in the end
the legacy of our papers & panels committee was some excellent pieces delivered at the conference and some unusually good issues of MYTHLORE over the next year or so.


After that we still saw each other at WisCons but eventually the charm of being on the same panel with the same people each year began to wear thin. In addition to Jared's self-destructive tendencies,
which were uncomfortable to witness, he was one of those people who took up all the air in the room.

I think for me the breaking point was when I was on a Dunsany panel at WisCon, I think in 1989 but at any rate after I'd started my dissertation on Dunsany. There were three of us on the panel: Jared and Richard West and myself and we had an hour. Jared went first and talked for fifty minutes. Richard went next and rushed through what he had to say in nine. That left me with a single minute in which to thank the audience for coming and to assure them I had things to say about Dunsany, if only there were time.

After he stopped visiting Wisconsin, and after I stopped going to WisCon and then moved out to the Seattle area, we no longer ran into each other and fell out of touch, aside from the occasional email. These past few days I've tried to remember the last time I saw him. For certain at the 1989 WisCon, that being the last time I was on a panel with him; possibly thereafter at a MythCon or two but I can't be certain about that. But can it really be thirty years?

In the end I think my strongest memories of him are from being on panels with him at WisCons and MythCons and discussions afterwards arguing this or that point raised during the panel. It was great fun, if a bit odd, to see him advance some striking but ultimately untenable idea in the presence of those like Doug and Taum and Verlyn, all of whom were certainly able to hold their own against him, even when Jared was in full flight. And I almost always learned something I didn't know from the back-and-forth of our conversations, even if we each ended as unpersuaded as ever of the other's position.

As a final point I shd note that Jared was not only a Tolkien scholar but also published on C. S. Lewis: his book about the Ransom series was notable for his acceptance of THE DARK TOWER as a genuine Lewis work (something on which I agreed with him). He was one of three people I know of who have ventured to predicted how the story wd have ended had Lewis completed it.  He also edited a collection of Charles Williams' book reviews of detective stories which make for enjoyable reading, esp. recommended for those who think of C.W. as a rarified figure. Near the end of his life he'd become interested in Nevill Coghill and Hugo Dyson.

Looking back on him now I think early on Jared adopted CSL as his role model, for good and for bad. Good, because Lewis was a massively erudite and articulate man, loyal to his friends and with an appreciation of popular fiction as well as 'literature'. But bad in that Lewis was fond of making outrageous and self-evidently false propositions and then using his rhetorical gifts to try to make his audience agree.

In the end, the Inkling I think he most resembled was not Lewis but Dyson: intelligent, amusing, exasperating.  I'll miss him.

*Among other things, this conference is memorable because it's there that I met Wayne Hammond, whom I immediately introduced to Richard West, marking the meeting of two great bibliographers.

**along with Richard West as the committee's Secretary and myself the third member of the three-person committee. If I'd thought of it at the time I'd have given myself the non-title Ordinary Member.

***and one of my favorite authors, John Bellairs, as Author Guest of Honor.

With this piece, I was reminded of John Aubrey's "brief lives" -- specifically the ones he wrote about people he'd known. Of course it would be nice to add a little standard information such as dates of birth and death, marriage[s] if any, academic credentials, &c.

I'd be interested in seeing, one day, a compilation of accounts: Lives of the Tolkienists, many of whom are alive right now, but others have died or have disappeared insofar as Tolkienian things are concerned. (Richard Plotz?)

First off, it's an honor to be compared to Aubrey, so thanks for that.

Second, I too wd love to see a compilation such as you describe. The closest approach to it at present, I'd say, are in the form of podcasts.

I found out there's a discussion on Jared over on TheOneRIng.net. Thanks to J. M. for letting me know.