The Sky is White today

So, the night before last I was quite startled when I went to check on the moon (which I do most nights, when I can manage it) and saw that it was an orangey-red in color, more the tone you get with a partial lunar eclipse than the rising of a harvest moon.

Then yesterday morning the sun was odd too: distinctly red, and casting red sunbeams early in the day. By mid-morning we were getting yellow sunbeams out of a white sky. Over in Des Moines (the Seattle suburb, not the city in Iowa) the sun looked more like the design on the New Mexico flag, except a-symetrical.

Last night came a dim red moon, not visible at all early in the evening, but I think even redder in color.

All this is side-effect of the out-of-control wildfires burning elsewhere in the state, one of which actually jumped the Columbia River Gorge (quite a feat in itself). Every level surface has tiny flakes of ash scattered here and there; the amount of smoke particles in the air was enough to cool down the temperature a little yesterday, which was supposed to have hit the record for hottest day of the year, had the smoke in the air not mitigated it. Reminded me of the definite temperature drop at the time of the eclipse two weeks ago.

It's at times like this that I really begin to understand how the major meteor strike that set off the dinosaur extinction or the effects of a really major Krakatoa-level volcano eruption can produce effects so far away from the actual site of the event. 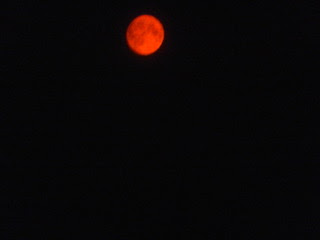 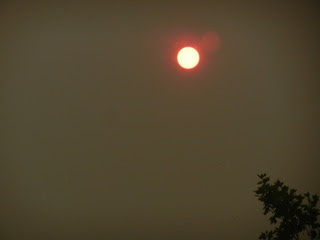 Unless I'm much mistaken, that's no pictures, not two pictures.

Dear ATM
Thanks for the alert. I've gone back in and updated the post, so they shd be there now.
--JDR