So, at NorWesCon back in April I watched some people play an interesting new game called TIMELINE, which looked intriguing enough that I picked up a copy about two weeks ago and finally had a chance to play it last night.

The rules are simple: each card in your hand represents an invention or discovery or significant event. Your goal is to play your cards into correct chronological position with the cards already in play. Thus if the cards in play are, say, THE INVENTION OF THE WINCHESTER RIFLE [1866] and THE INVENTION OF BLUE JEANS [1873], and you want to play THE INVENTION OF THE TYPEWRITER, you have to decide whether this comes before both events, between both events, or after both events.*  If you guess right, your card joins the timeline, and placing the next card just got that much more difficult. If you're wrong, your card gets discarded and you have to draw another. Since the goal is to be the first to run out of cards, the more cards you place correctly the better you're doing. Cards can range from modern (the computer mouse, the ball-point pen) to ancient (fire, agriculture) to just about anything in-between (corks, crossbows).

But the card that really got my attention when it came up last night was "LORD OF THE RINGS PUBLISHED (FIRST VOLUME)", accompanied by a picture of THE FELLOWSHIP OF THE RINGS. They even got the right dust jacket for the first edition Allen & Unwin hardcover and, of course, the date [1954].  Nice to see Tolkien's book ranked with things like THE DISCOVERY OF THE ASTEROIDS and INVENTION OF THE LIGHT BULB.

Here's an image of the card: 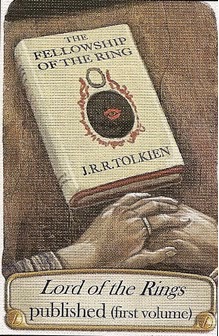 I can see that if you play this game a lot, you'll eventually learn the right dates to a lot of things. And it's for this reason, I assume, that the people who make it have put out four or five supplements (Discoveries, Diversity, Historical Events, Music & Cinema), each I assume with another deck of similar but new cards, to keep things challenging. I know one is themed towards the arts (music, literature, the theatre), which I'll probably be picking up.

Since noticing this at a number of booths in the dealers' room at NorWesCon I've seen it at a game store (The Fantasium), at one of the area Barnes & Nobles (the one in Federal Way) but not at another (the one near SouthCenter), as well as available online from Amazon.com and, of course, from the folks who actually make it: Asmodee (this being a French game translated into English).

I see there's an Ipad version but haven't seen or played that yet.

P.S.
I shd note that, to my delight, the set includes not just Tolkien but also the invention of rpgs [1974]

*The correct answer, according to the game, is in this case "before both" [1714], which is much earlier than I wd have guessed
Posted by John D. Rateliff at 10:23 PM